Written by
BROTEC
Posted in
Uncategorized The history of ‘Truly Great Limited Edition Whiskies’ is few and far between really.
Odd ones pop up getting consumers frothy and excited, then every other brand decides to follow suit in some way, before we all end up gazing forlornly at an overpriced Whisky Auction Site: either regretting missing out on a sold-out purchase, or regretting drinking and finishing a matured investment. Sad really.
It’s like the words ‘Landfill Indie’, a phrase that we bring with us from our time in the music business. One band would spring out of nowhere, redefining a stagnant music scene.

Then every company would rush out something that sounded similar and looked vaguely the same.  Arctic Monkeys?  True Game Changers.  Milburn… Hmmm maybe not so much.

But when it comes to a limited edition series, the search for excellence becomes even more difficult.
The difficulty faced by whisky companies is keeping the attention of the whisky consumer.  Balvenie and the Tun 1401 series started off rather splendidly, before a few fans and collectors began to trail away, disappointed they either couldn’t afford or find the editions they wanted, as they were spread across the global network of off-trade and Global Travel retailers.
Conversely, when Highland Park released the Magnus Trilogy, they got everything right:  The liquid was excellent, the price points spot on and the outturn, not too outlandish to make fans feel like they were being taken for a limited edition ride.
Then came the Valhalla Collection: Four whiskies, over four years, each one representing a different norse god –  the liquid being tailored to the supposed personality and character of the god or goddess.
The initial release, Thor, was quite a stunner. Bold, powerful, smoky and muscular, it was a whisky that had everything you could want in a bottle of HP.
Next up was Loki: the trickster, the shapeshifter. Unusually fruity and fragrant upfront, with a totally different profile on the palate, which lived up to the unhinged genius of its namesake.
The fairer, more gentle side of the brand was explored with Freya:  Etherial, light and floral. It perhaps didn’t have the same impact as the first two releases from a liquid perspective and in our opinion, was the least likely Highland Park to be recognised as a true HP.  Still, it adhered perfectly to the character profile.
This week saw the release of Odin, the conclusion of the series. As the leader of the gods, Odin demands respect –  especially given that he supposedly fathered the mighty Thor. Will this be a reflection of his namesake whisky? 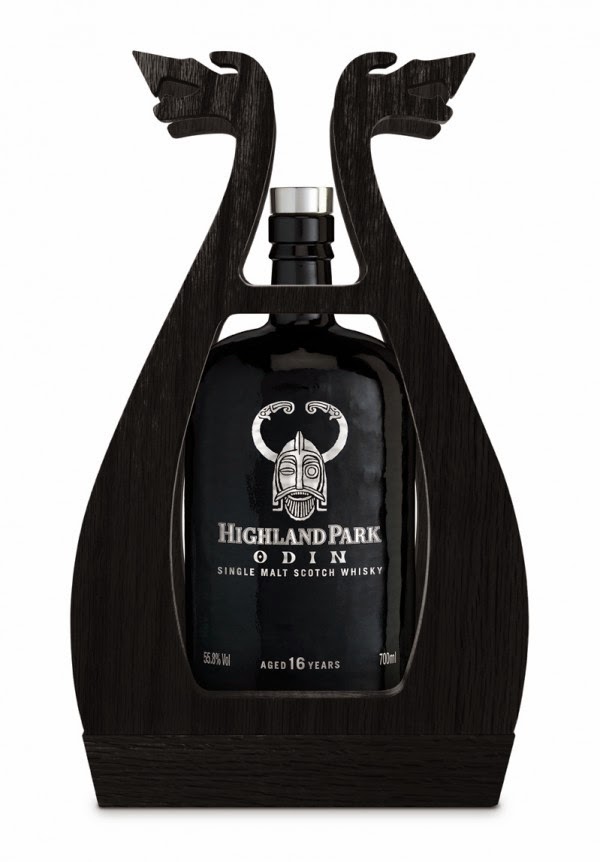 Highland Park – Odin –  16 Year Old – 55.8% – £180
Nose: Initially a little closed and quite one sided, but given a few minutes in the glass, you’re immediately in HP territory:  Fragrant fruity smoke, honeyed malt, some citrus notes and a little waft of dry sherry wood.  So far, so good.  It’s powerful and the you can definitely tell that the palate will be quite a challenging experience.
Palate: Super lively and spirity –  in fact as fiery as they get at this strength.  But then it dies down and you’re into lemon and lime zest, a wonderful malty backbone, a little rubber note (not that off-putting though) and a huge swathe of smoke.  Not perhaps as smoky as the last Hp release, Dark Origins, but certainly bolder than any of the regular expressions.
Finish:  The finish sees lingering notes of sherry, some very dry sherry cask wood and a little sweet honey, but a surprising absence of the smoke… as if the great god himself has disappeared in a majestical puff of the stuff.
Overall: A solid conclusion to the series.  In our opinion, the bar was set stupendously high with Thor and as a result, it’s hard to outshine that particular expression purely from a liquid perspective, but what this proves is that once again, Highland Park are the real thought leaders in presenting innovative, creative bottlings. A fond hurrah to a great, consistent series.
Mere mortal companies would have fallen hard and fast after the first two, but HP?  Well, they must have Valhalla on speed dial, with Gerry Tosh and whisky maker Max McFarlane sitting in a car with the engine running, waiting to kidnap another unsuspecting member of the Underworld. We look forward with excitement to the next series.